While I have zero talent when it comes to drawing anything, I do like to picture scenes or locations from my books. When it came to Hometown, I had images in mind before I'd written a word. I've always had a thing for normal, known places turned a little...odd. Unused traintracks for example. I was on a train a few years ago, pulling into a station and noticed a bunch of old tracks covered in weeds, all rusting and half-obscured by the undergrowth. Once upon a time, they would have been used, of course, but at that point, they were just metal lines left in the ground. I quite liked that. If there'd been some global pandemic or war, the tracks would have looked much as they did on that day.

Now, expand that image to a street or a city centre or the entire city. Or a country. Everything still more or less in one piece but covered in weeds, windows broken, doors boarded up and damage from smoke or water leaks marking brickwork.

With that in mind, coming up with descriptions for the other side (the underside if you like) of the town in my book was easy. All I had to do was think about those old traintracks and bear in mind the look of a couple of films: Silent Hill and Escape From New York  - one of which gets a cheeky mention in Hometown. 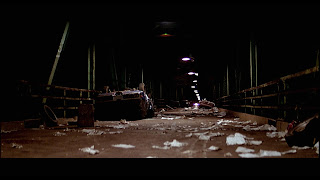 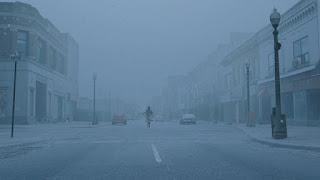