About a thousand years ago

About a thousand years ago (well, the mid to late nineties), I was part of a tight group of friends which meant quite a few nights in various pubs or in people's houses to drink cheap lager and watch them flick their dog ends on the garage roof so their parents didn't find out they smoked. Pretty much the same as anyone else at that age.

Jump forward twenty years and, for the most part, trips to the pub with a big group has died a quiet death. Kids, work, money issues, marriages, separations, people moving away, day to day life and the general passage of time...it's all had an effect. And while (again for the most part) the group I was part of back then is still tight, it seems these days we only all get together for big occasions like weddings. As the last one was a couple of years back, it's fair to say there's been no big gathering without a reason for doing so in a long time. Until yesterday, that is.

A mate of mine who's now married with a baby and living in sunny Kent orgainsed a reunion of sorts for this weekend. When he first mentioned it, I assumed he meant everyone piling into a pub on a Saturday night but that's because my wife and I don't have any kids. The plan was for a giant lunch which meant people could bring the small ones and not have to sort babysitters. Now that more of us have kids than don't, it only made sense.

In any case, beer was drunk, food was scoffed and babies dribbled while the time between now and back when kids were a ridiculous idea (ditto being best part of forty) mattered but only in the good ways because we're still here. Different, but still here.

And if you want that length of time summed up in a photo, it won't be the group shots we took at the end of the gathering. For me, it's this shot from the lake outside the pub where we took a walk while the sun went down. 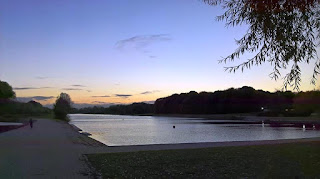 And it's in every single word of Hometown.
Posted by Luke Walker at 11:31