A churchyard was close by, grown from the lifeless ground in a second even though there’d been nothing but stunted grass and the freeze of the day in its place a moment before. Twisted trees poked their branches towards the grass. Old trunks and rotting foliage spread over the yard, meeting thick bundles of bramble bushes. The green of the shrubberies should have gleamed in the cold sunlight. Instead, they were faded, sickly. This was a dead place, somewhere to do nothing but live in the awful weight of fresh grief and be stuck there forever.
Jutting from the earth where there’d been only more brown grass and ancient trees all twisted together, the church loomed as large as a cathedral, impossibly bigger than it was fifteen years after Alex last visited it. The grey stone was bleached white in places, bricks and mortar cracked and crumbling; the windows all jagged holes and flaking glass. The building didn’t simply exist on the grass, it ate the space it filled, chewing it, mashing it into a gooey paste, then swallowing what was left where it would be dissolved in the icy void of its stomach—broken down into nothing as if it had never been.
Alex’s darting eyes took in more and more of the old building, even as she screamed inside that it couldn’t be here because it was a good place, a happy place of light and worship and decent people. It didn’t belong on a dead day in a dead place with dead wind caressing its exterior, then blowing in through the holes and pitted scars of its frame.
Or through the doors creaking open, the old wood buckling and crumbling as the hinges gave way, snapping before the rusting metal clattered to the ice-cold stone of the steps.
One half of the doors broke free from the frame. It split into several pieces on impact with the ground; the other hung loose, and the pitch-black night living inside the church swirled, danced, beckoned her.
A skinny arm, unclothed so she could see what the disease had done to the flesh and muscle, jutted out of the doorway, more and more of it exposed as the figure slightly beyond the opening came closer. A finger uncurled, the bone no thicker than a twig and the skin as thin as tissue. It curled, uncurled, curled again, and the woman’s voice barely a croak didn’t live in the air and earth as hard as rock. Nothing lived here. The voice was the air and earth; it was every part of this dead place and dead day.
'Alex. Come inside. It’s time for church.'

Ascent - pre-order link (to get the book two weeks early) 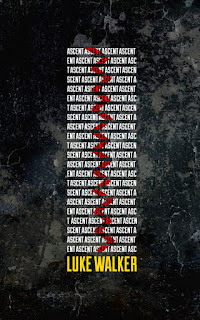