The Mirror Of The Nameless - cover reveal

Presenting the cover to my upcoming novella The Mirror Of The Nameless which will be published by Kensington Gore on 1st September (links to follow). If you've been paying attention, you'll know why I'm extra chuffed with this one being published in print as well as ebook. And while I'm not at liberty to go into details just yet, I can say Mirror will contain a little something extra special. Lastly, the prequel novel, The Day Of The New Gods, will also be published by KG. So, if you like Mirror, you'll definitely like the prequel. 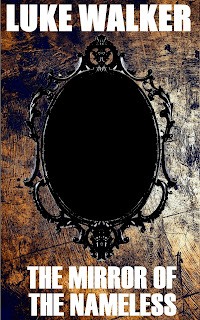 In a world controlled by three tempestuous gods ready to destroy all human life on a whim, Dave Anderson knows he should follow the herd and not make waves or he may end up sacrificed to the monsters from the darkest reaches of the universe.

All that goes up in smoke when he discovers his teenage daughter is risking her life in the resistance movement against the demonic tyrants.

Dave, an unlikely hero, joins forces with her boyfriend in a frantic hunt to save his beloved daughter before the authorities feed her to their dark-overlords.

Their sole hope of overthrowing them and bringing peace to this totalitarian society is finding a secret weapon which, legend says, is the only way to defeat the gods.

But unleashing the weapon may risk opening a doorway to something much, much worse.
Posted by Luke Walker at 19:01