In case anyone was wondering why I hadn't shared any links to Ascent, it was because there was an issue with the ebook version which took a while to sort out. Everything should be okay now, so I'm delighted to post all the links now along with a little peek at the book.

As I've said more than once, I was gutted when the original release went down the toilet after that publisher closed their doors, so having it brought back to life through Hellbound Books is a result, I'm sure you'll agree. And as always, if you can do me a major solid of posting a review - no matter how short as long as it's honest - that would help me out more than you can imagine. In the meantime, how about a cheeky look at Ascent?

Claws sank into the skin of Dao’s forehead. Blood flowed from fine cuts. He still didn’t have the breath to make a noise, despite the pain rapidly becoming agony. His head was turned; he had no choice but to go with it while Yang’s wails rang out, non-stop, beyond awful.

Whatever held Dao’s head pushed him back towards the window, the glass looming closer as he dragged useless fingers over the carpet and wept. The forced movement took him to the window and kept going. His nose pressed into the glass, then his forehead. And still, the claws in his head wouldn’t let go. Dao’s first coherent thought in seconds was:

It’s going to crush me.

Dao’s vision rippled. For a tiny moment, even the terrible sensation in his skull lessened. Then the glass of the window parted like oily water, its surface shimmering and dancing on all sides as Dao’s head oozed through it. He couldn’t close his eyes even when the window—or whatever the window had become—pressed its cold into his pupils for a moment, then flowed to the sides, then up and below.

He’d been pushed through the surface of the glass as if it were fresh mud. His knees and hands remained on the carpet while his head and neck jutted from the side of the building, offering him a God’s-eye view of Willington’s centre and its new lifeless surface.

But it wasn’t totally lifeless.

The claws forced Dao to bend his neck and see what moved on the pavement ten floors below.

Skittering, black pools sliding together, growing and forming wider circles; those circles slowly began to jut from the ground and form the unmistakable shape of bodies, while the same fierce white light that shone in the east rose from the pavement. The faint whiff of something meaty rose. Something burning reached Dao’s nose.

The stink and the shapes too awful to be called human were not the worst. Neither was the impossible horror of his head pushed through a window without any glass breaking.

The claws gripping his skull, piercing skin to send tiny lines of blood streaming down his face, had changed.

They had become the soft weight of a hand.

A child’s hand holding his skull and forcing his neck back, so his staring eyes couldn’t help but see the silver of the sun shining from the wrong direction. 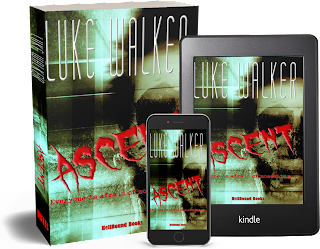