I've been meaning for months to share more links to decent books and films I come across and, frankly, I've been piss poor at that mainly through a lack of time. Obviously, writing has to come first followed by sending my stuff off and then playing the waiting game. The result is my plans to spread the word about a book or film I really enjoyed goes down the toilet.

Anyway, I recently watched a Western called Brimstone which was absolutely great. I'm not sure if you'd call it a Weird Western or a Western/Horror or a WTF; all I can say it's not just a straight good guys vs the bad guys film by any means. Nor is it a linear tale. Told in four chapters which link to each other and brutal as hell, it's not a film for everyone (put it this way - I have a pretty strong stomach as you might imagine, and even I thought it was fierce) and the run time of well over two hours might put some viewers off. For those who don't mind a slow, detailed story, an unusual structure and a dark storyline, Brimstone is one for you.

I won't say anything about the plot as I often think it's better to go in at least slightly blind to a film like this one. And yes, that is Jon Snow. He knows nothing. 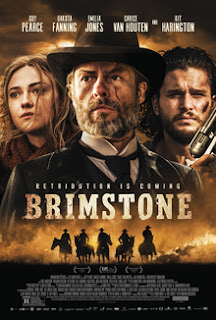 Email ThisBlogThis!Share to TwitterShare to FacebookShare to Pinterest
Labels: films