The Day Of The New Gods - published on Friday

Just a couple of days to go before The Day Of The New Gods is officially released. I'm hoping for some reviews to come through at some point in the next couple of weeks - and as I've said many times before, reviews are essential to books and authors, especially to writers who don't have large publishers behind them. So if you read Day and you dig it, I'd appreciate it in a big way if you could spare a few lines to let others know what you thought. And while I think to say so in case anyone's missed it, Day is the prequel to my novella from last year The Mirror Of The Nameless.

Anyway, I'll share links (and perhaps even a gander at the opening) on Friday. In the meantime, here's the blurby bit. And yes, this is as full-on, violent and action horror as it sounds.

Fleeing from a successful bank robbery, Brian Jackson has an iron-clad plan: get his twelve-year-old daughter and escape Britain for the good life in Spain with the rest of his crew. All he has to do is avoid the police and the gangsters who want the twenty-five grand he's stolen.

Or so he thinks.

Three hideous gods have broken through from outside the universe, each monstrous deity crawling through the void with the sole intention of turning Earth into their own playground of Hell. Now, all that stands between Brian losing his little girl to the gods are the few bullets in his gun and the fellow criminals who've got his back.

Brian's one shot at saving humanity from being consumed means racing into the burning heart of a country that's tearing itself apart. There, he will wage war upon the gods while they release their final horrific assault on the world.

It's going to be a bad day. 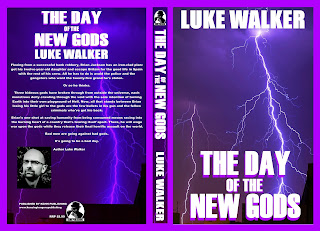