Word on the street (well, direct from the publisher) is that Ascent is published this Friday. It isn't listed on Amazon yet, but obviously I'll post those links as soon as they're live. In the meantime, how about a cover reveal? 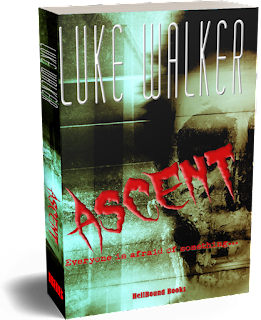 When terrorists target an American air force base with a nuclear bomb, Kelly Wells races to find her sister in a nearby office block, desperate for them to be together in their final moments. At the same time, a handful of others fight their way through a panicked city to reach the building—frantic to make it to loved ones before the device ignites less than fifty miles away.

In the frozen instant of the detonation, Kelly, her sister and three strangers are locked in that moment and trapped in the offices. But they are not alone. An ancient god from the deepest pits in the earth has woken and knows their most private secrets and guilt. Now, horror takes the form of their darkest dreams to draw sustenance from their terror, and the beast stalking them will dine well.


Because everybody is afraid of something.
Posted by Luke Walker at 19:38