Memory is a funny thing

I've got a pretty decent memory - not for anything that might be useful, but more for seemingly inconsequential stuff, so it was a shock the other day when a friend posted a few old photos on Facebook because I'm in a couple and I have no recollection of them being taken. Admittedly, they're pushing twenty-five years old and I'm not as young as I used to be, but part of me still thought I should have remembered them. I suppose being nearly 42 isn't 17 and the frozen seconds in those photos is a long time ago. The good thing is I'm still friends with some of the people in the shots. Others, we've lost touch since the mid 90s which is just life.

A few minutes after seeing the shot below, I thought of a scene in my book Hometown that could have been inspired by the photo. As I don't remember the photo, it wasn't. But yeah, I think maybe it was. Because something in me remembered. 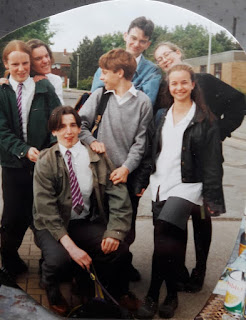 She pulled the album free and let it fall open to a double page spread of pictures. At once, grief filled her just as joy did.
‘Geri,’ she whispered and traced her fingertip over Geri’s smile and her face. The shot was from a night in a pub, probably around the time she and Andy had left for university. In the photo, Geri was smiling and lifting a drink to her mouth, Mick beside her with two fingers held up to the camera and his tongue sticking out. In the photo beside it, Mick had lowered his hand, Geri’s drink was at her mouth and not quite obscuring her smile as Mick kissed her cheek.
Karen’s tears pattered on the picture and she let them fall, smiling as she studied the other photos. They didn’t appear to be in any order. Shots of their late teen years sat with older shots of Geri and her family when she’d been twelve or so, then shots from university life. Karen turned the page to photos of childhood pets: a large black and white cat, one ear tucked under his head and a paw reaching towards the camera; a border collie pup chasing a ball in the garden. She turned the page again and her gaze immediately fell on a photo in the top right.
It was all of them. She sat beside Geri on a school table. Stu was on Geri’s other side, Mick beside him, and Will in front of Geri, her hand on his shoulder with Andy squeezing into frame beside Will.
Others had crammed into the shot and while she could name all of them, she knew they weren’t part of the photo in the same way she, Geri and the boys were. Maybe they knew it, too. A few were smiling, but most were looking out of shot or at each other. She touched Geri’s hand on Will’s shoulder and there was no jealousy. Seeing them together in such a perfect moment was exactly as it should be.