Been a few weeks since Pandemonium was published and I've been meaning to share more about it. But with real life of shifts and the plague, it's been a strange time. Anyway, here's the opening to my new one. And if it floats your boat, you know what to do with the link at the end.

mybook.to/Pandemonium
Posted by Luke Walker at 11:25 No comments:

You might have noticed a couple of my books are no longer listed over there on your right. Or you might not. Either way, I've had three of my books go out of print over the last few months for a combination of reasons. Sad for me, but it happens a lot in the publishing world. Although in all honesty, I wasn't expecting it for a book I had published less than eighteen months ago. I also wasn't planning on it a fortnight after I started a third book connected to two now homeless.

I have some decisions to make about those books. Obviously I can't submit a third book in a series to publishers when the first two aren't available, but as the one single thing about writing and publishing that I have any control over is the actual writing, I'll keep going with this new one while considering my options. It's disheartening to say the least when you work you arse off only to be back to square one within a matter of months, but on the other hand, I do still have a few books available and some behind the scenes plans going on, so it's not all bad.

A slight tangent - I sent out my latest newsletter a few days ago with a cheeky look at the opening to Pandemonium so if you fancy seeing it for free, sign up to my newsletter and I'll make sure you get it. And all my currently available books are over here in kindle, paperback and most in Audible.

Hope you're staying safe and keeping your shit together.
Posted by Luke Walker at 11:11 No comments:

Feels small and silly to say this, but here it is all the same - Pandemonium is out today in kindle and paperback (with the Audible release to come). Nobody has been left untouched by the current global situation; nothing is certain and it feels like we're on the edge of some serious shit. All I can do is tell my stories and hope they don't disappear in the middle of this storm. So if you'd like to buy a copy and/or spread the word, it would do more for me than you can imagine at the moment.

Be cool. Take care of each other. 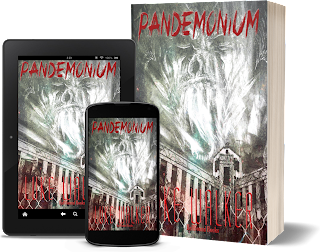 Here it is - the cover for Pandemonium along with the pre-order link for publication on the 27th. As mad as it seems to give a shit about books and publishing in the face of Captain Trips, I'm a firm believer in needing our stories when our backs are up against the wall.

So, be safe and take care of your friends and neighbours and strangers. 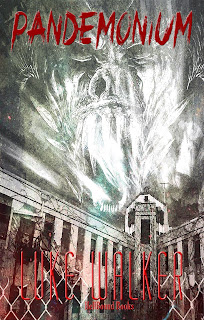 Been a while since I posted on my blog mainly owing to more real life stuff. I'm still writing but with that, the job situation and so on, time for blogging has shrunk quite a bit. In all honesty, I'm putting whatever free time I have into my newsletter mainly because blogging doesn't have the same reach or importance it did several years ago. So if you want to sign up for the inside guff, covers and what not before I post it anywhere else, you know what to do.

Now that's out of the way, here's the news: my next one with Hellbound is published on 27th March. Pandemonium feels like it's been a long time coming but that's the publishing world for you. Looking forward to seeing it alongside Ascent, The Unredeemed and The Dead Room. There'll be cover reveals and a look at the opening in the next few weeks. To give you an idea of the story, here's the blurb:

Kidnapped in broad daylight from a busy Edinburgh street, Hannah Wilson has no idea what her abductors want with her as they chain her in the back of their van and speed out of the city. Or why they tell her she’s perfectly safe when she’s terrified for her life.
Transported to the far north of Scotland with dozens of others yanked from their lives across Britain, Hannah is taken to an isolated compound nicknamed Pandemonium; an utterly secure prison ruled by creatures that should exist only in nightmares; a place nobody has survived for more than a few months. Hundreds of miles away from help, her family's lives at risk if she disobeys any order, Hannah knows the key to surviving her captivity is to bond with strangers and teach them all to refuse to be victims. But she’s running out of time to convince the other captives to take their fight to the black heart of the prison and to its inhuman warden. And Hannah is yet to discover she is not the only one about to start a war.
In Pandemonium, all Hell is going to break out.
Posted by Luke Walker at 11:03 No comments:

Well, this is a nice surprise for the end of what has been a shit year (I'm ending it with a cold which is about par for the course of 2019).

The collection of essays and interviews I mentioned a while back is published tomorrow in ebook and paperback. The Horror Writer features some of the greats of the genre (and me) with their thoughts on their genre, advice and all that good stuff. It's published by Hellbound and edited by Joe Mynhardt of Crystal Lake Publishing, so you know it's good.

It's on Amazon or you can get it straight from Hellbound at this link:

I'm immensely proud to be part of this and to be alongside writers I've admired for a long time. If you want to know about writing horror, this book is for you. 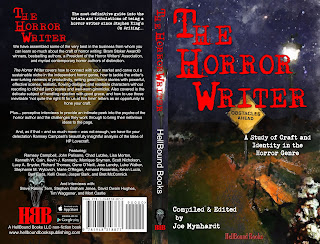 OK, that's me definitely done for this year - unless I get any massive news in the next twelve hours. Be good, people.
Posted by Luke Walker at 12:36 No comments:

At this time of the year, a lot of writers do a look back on their achievements. I've done the same once or twice. Frankly, I have sod all interest in doing so for 2019. Personally, this year has been a massive turd. Losing my dad, losing my job and losing much of the sense of being able to write anything of quality. I still wrote during this shitstorm, but most of the stuff I produced was piss poor. On the plus side, I'm immensely proud of the books I had published and while they haven't won any awards, garnered much in the way of reviews or sales (what was my point with this?), they are some damn good books.

So, goodbye and good riddance to 2019 in a few days. Onwards to 2020 and my plans. I start a new job in January which is a massive change (as well as being a massive relief) after fifteen years in the same role. It's different hours than I'm used to, so I need to work out a balance of my working life and writing instead of having more or less every evening and weekend free to write.

Book wise, Pandemonium will be out very soon and The Kindred will follow later in the year. Two very different books and tales I hope, as always, will get me noticed. It would be nice after close to a decade of being published and writing 'professionally' for twenty-five to have something to show for it. Other book plans: I'm pushing through a fourth draft of a book I started at the beginning of 2019 which is at least one draft more than I usually do; plus, with working on the same tale for an entire year, I'm utterly sick of it. This one is the book that fell apart twice due to upheaval in my personal life; the book I honestly thought would have to be binned at several points. The end is in sight on a finished version and I feel like I'm crawling back to the light with writing. I have no idea if this will one will go anywhere especially as it's different to my usual stuff and I'm not considering that at the moment. It's just a case of getting the story told and moving on to the next.

Short stories have been thin on the ground for a long while in terms of publication but not writing. I've come up with several over the last year but not edited them or submitted them anywhere. I have plans for them which I'll detail at some point - it depends on a few things out of my control. On a side note with short stories, it does seem the market is shrinking and definitely so in terms of a paying market. Out of all the creative arts, writing is probably the one most likely to be expected to be done for free. The idea that any creative should be paid for their work and time in the same way we would pay anyone is alien to a lot of people. Modern life, man.

That's about it for now - more writing to come in 2020. As always, it would be a massive help if you can help me out with honest reviews on Amazon and Goodreads -

Okay, I'm out until next year. Be good and let's bring on the better days.